You don’t need the late Tommy Vance to tell you that prison isn’t a particularly fun place to be locked up. Even if you do get a pint of foaming nut brown ale every now and again.

This beginner’s guide is intended to get you familiar with some of the basics you’ll need in The Escapists. It won’t give you step-by-step walkthroughs of the different prisons, but it will spoil a few of the crafting recipes that I consider to be essential knowledge. There’s also a link to a full list of crafting recipes at the end if you want to know all of that.

Update 29 August: If you’re looking for help with the sequel, here’s my starter guide to The Escapists 2. 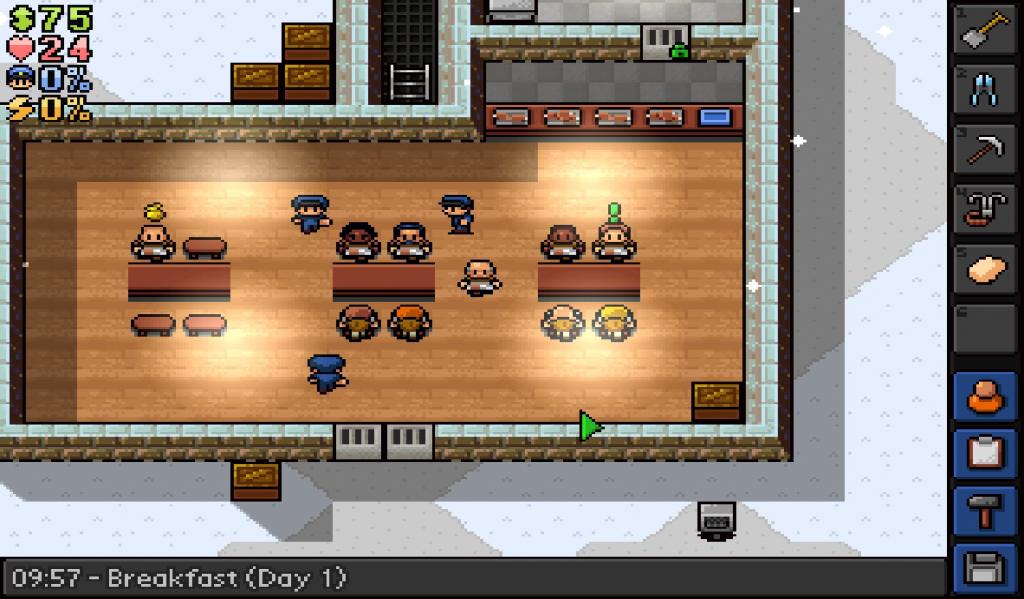 The greatest indignity of all: communal eating.

Everything in here is based on the pre-release 0.99 build, so it’s possible that subsequent updates to the game may have changed things slightly (always a risk with guides of this type.) I’ll try to update anything glaring.

An Early Lesson in Prison Life

Do the tutorial. I know that sounds really obvious, but you’d be surprised. The Escapists’ tutorial teaches you extremely useful bits of information, such as how to recognise when fellow prisoners need a favour (which could get you some cash,) or have useful items for sale (the little bag over their heads.) The latter is something you’re likely to be making use of quite a bit.

Before you can start figuring out how to escape any of The Escapists’ devious prison complexes, you need to know the layout. Follow your daily routine (roll call, meals, gym time, working) for a day or two and take note of where you can go. Where are the contraband scanners? Do any areas appear to be poorly guarded? What kind of barriers are standing between you, and freedom? Which times of day do you have to yourself? These are the sorts of questions you should be looking to answer. 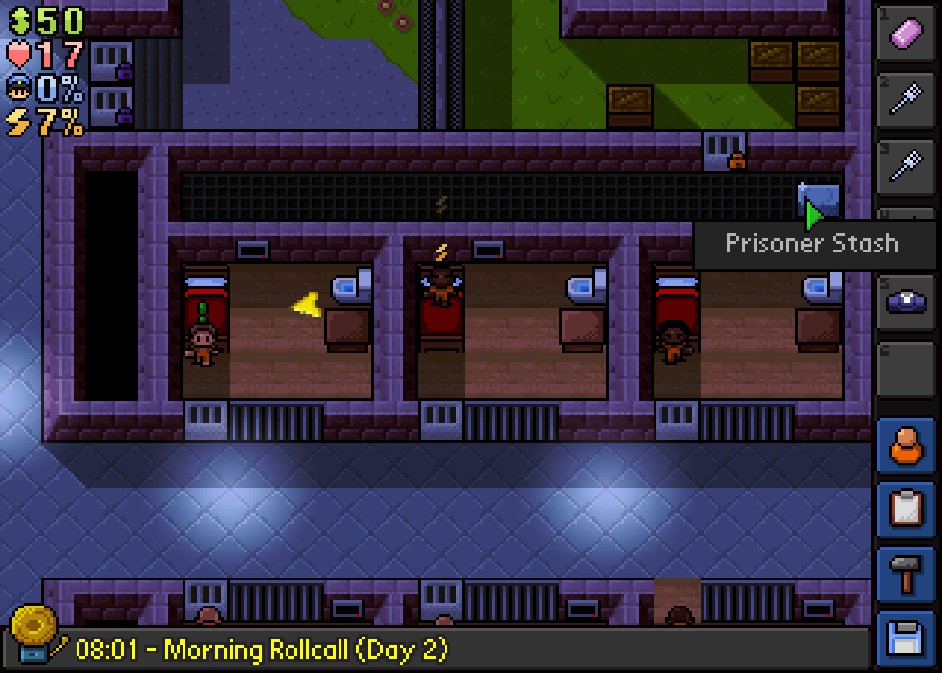 You’ll get nowhere without tools, or items to craft them. Don’t be afraid to use your spare time to loot the desks of fellow prisoners. May as well keep your criminal kills sharp while you’re inside, after all.

Look out for things like duct tape, files, wires and magazines. You can rarely have too many of those items. Don’t overlook the usefulness of plastic forks, spoons and knives from the canteen tray either. Each one of those can be used to slowly chip away at walls (forks,) the ground (spoons,) and fences (knives.) None of the plastic utensils count as contraband, so you can wander around with as many as you can carry, and stash them without concern.

The problem with plastic utensils is that they’re slow and break incredibly easily. Sooner or later you’ll be creating some basic cutters (combine two files and some duct tape) or wandering around with a purchased screwdriver. These things are contraband (denoted by their red item text,) which means if you get caught with them in your possession you’re going to be in trouble. Your stuff will be confiscated, and you’ll probably wind up in solitary confinement for a few days.

Even the early prison levels in The Escapists have contraband scanners here and there, which makes it tricky to carry hot items around with you (unless you can craft a special contraband pouch from foil and duct tape.) Therefore, you need a safe stash. 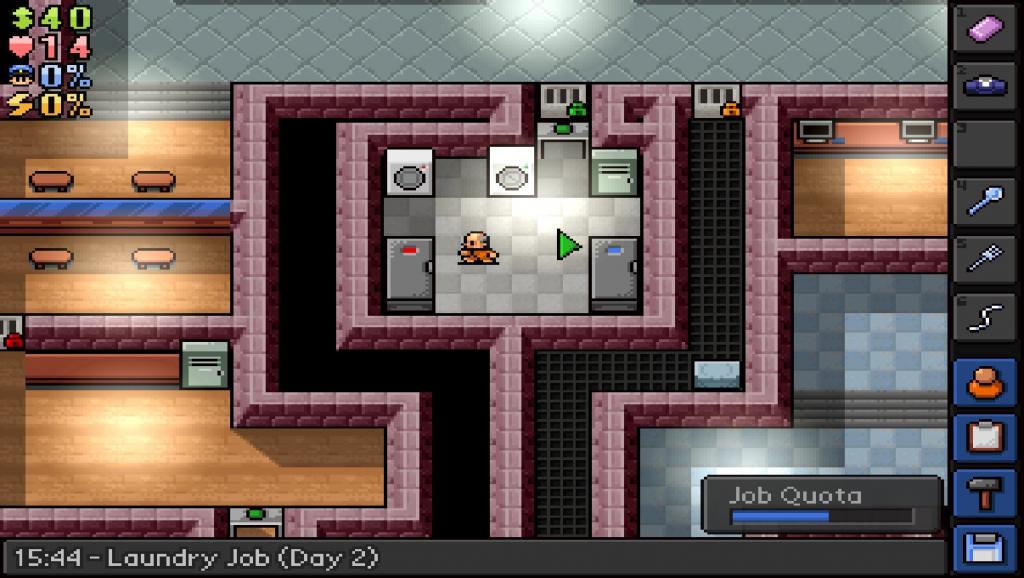 The contraband scanner means you won’t be bringing any ‘hot’ items in or out of the laundry room without help.

Your cell desk is … not great for this. While you work on something else though, it may be all you have. In order to keep stuff in there safe, pay attention at roll call for which cells are going to be searched. If your name is mentioned, book it to your desk and take out any offending items (it may be necessary to flush things you can’t carry.) Leaving roll call may draw some heat, but it’s better than losing everything.

As soon as possible, set yourself up with a safer stash area. This might be a little alcove where you’ve dug through an out-of-the-way piece of wall and covered the gap with a poster (magazine and duct tape,) or in some vents you’ve managed to unscrew with a screwdriver. Anywhere that already houses a prisoner stash (one of those grey lockboxes) is likely to be good choice. Wherever it is, you need to …

Guards in The Escapists will notice things like open vents, holes in fences and walls, or anything else seriously out of place around the prison. Somehow, with their superhuman videogame AI, they’ll trace it back to you. This means you need to be smart about keeping any escape routes or item stashes concealed.

As mentioned, holes in walls can most easily be concealed with a poster (created by combining a magazine with duct tape.) Just remove and replace it whenever necessary. As long as you don’t destroy them with cutters (or similar,) vent covers can be replaced quite easily as well. Fake vent covers can be made by combining a pair of paper mache items (themselves made by combining any toilet roll with super glue.) Be careful when using these though, because they degrade each time you remove and replace them. 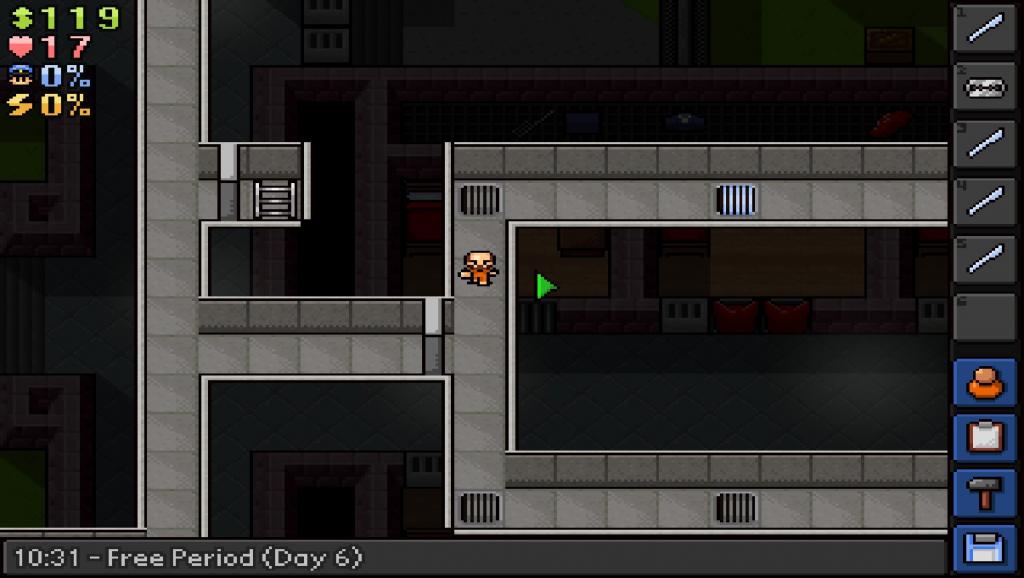 Always remember to replace any vents you take out.

If you’re working outside (or under) your cell during night hours, then a bed dummy is essential. For this, you’ll need two pillows (nab them from hapless fellow prisoners) and some bed sheets. Just like Alcatraz.

To fund a lot of your enterprises in The Escapists, you may need a steady prison job. Most of the early prisons start you off with one, and the laundry duty you’re given in Center Perks actually provides a prime opportunity to steal a guard’s uniform (as long as you remember to briefly wear it to get around the contraband scanner.)

If you want a better paying job, or one which you think will provide better access to useful tools or locations, you need to get the current job holder fired. The best way to do this is to check the job board (every prison has one somewhere,) find out who your ‘mark’ is and then make sure you’re distracting them during work hours. And by distracting, I mean fighting.

Remember that each job requires a certain level of intellect. You may need to brush up on your reading before you land that coveted metalwork position. 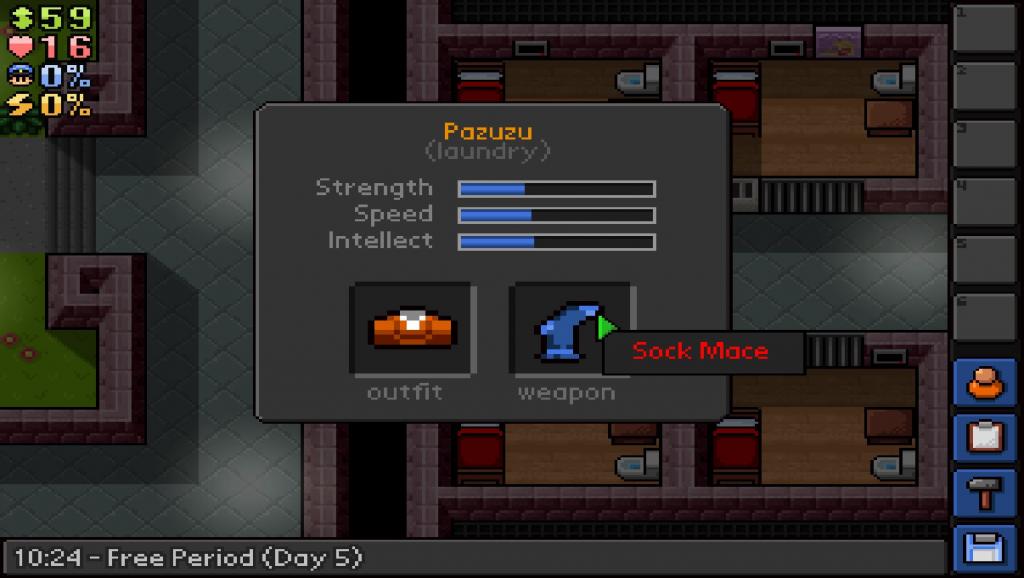 Strength and speed are both important, but don’t neglect intellect. It determines what you’re able to craft.

If you’re in need of a coloured key to gain access to certain areas, and aren’t fortunate enough to come across one in a prisoner stash lockbox, you’ll need to make one for yourself. This takes a fair bit of planning and a few key ingredients.

To begin with, you will need:

A wad of putty (toothpaste combined with talcum powder.)
Some kind of weapon and a decent amount of strength.
A guard you can single out for an attack.

It’s not a bad idea to construct some molten hot chocolate (mug, chocolate and a lighter); this gives you an instant knock-out.

Once the guard is down, quickly search them. If you’re lucky, they’ll have a key. Combine the key with your wad of putty to fashion a key mould. Then pop the key back on the guard’s unconscious form and leg it.

Assuming you got away with all that, you now need to make some molten plastic (comb or toothbrush, plus a lighter) and combine it with your new key mould. Ta-da, you now have a plastic key in your possession. 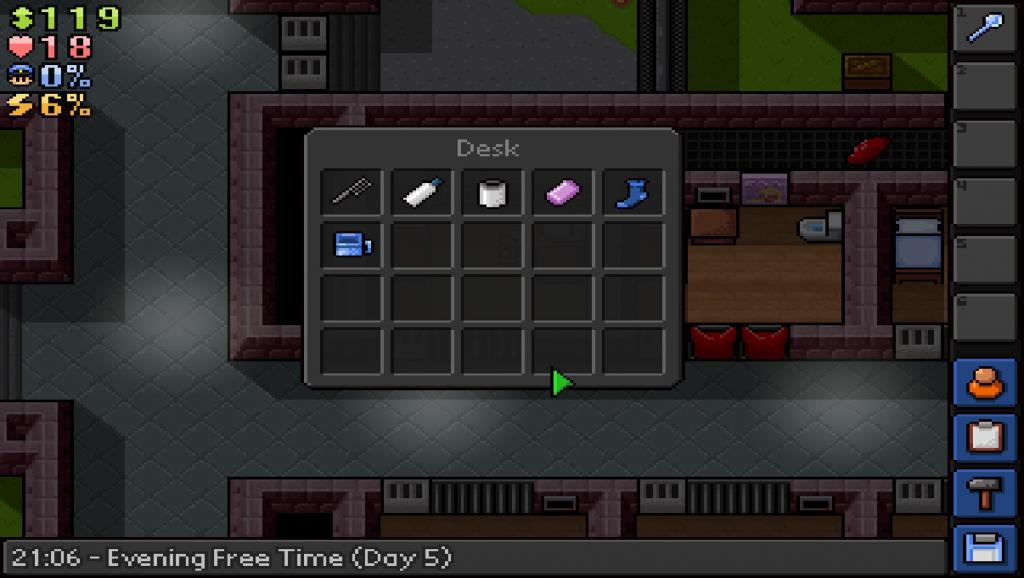 Other people’s desks can be fine sources of mugs and similar useful items.

If you’re planning to stroll around outside your prison cell at night in The Escapists, you’re going to need a guard’s uniform. I’ve already detailed above (under the jobs bit) how to get one in Center Perks. Prisoners will sometimes have them for sale, too.

Should you need to make one, combining a bottle of bleach with a standard inmates uniform will give you some white overalls. Mix these with some blue ink and you have your guard disguise.

These aren’t completely fool-proof, and sentry snipers will still figure you out if you’re doing something suspicious or lurking about too close to them during the day. But in the dark, at a distance, you can get away with a bit of fence cutting or other nefarious activities.

Digging your way out will require lots of supports (if you’re digging quite far,) and a method of getting rid of the dirt you generate.

Leaving from the roof means you’ll need a grappling hook, or bedsheet rope. Or both. 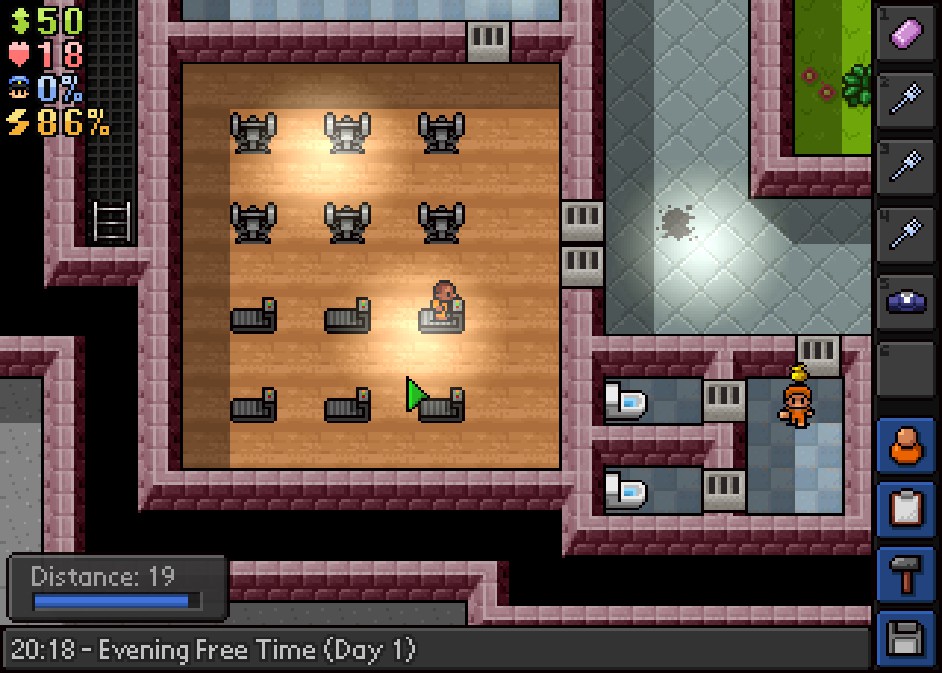 Don’t forget to shower afterwards to lower your fatigue levels.

Keep up with your exercises. Being in prison really hurts your gains, so your stats continually degrade.

Watch out for fatigue levels when escaping. Consider taking some food with you.

Remember to be nice to the other inmates (when you’re not nicking their stuff.) Chat with them. Do their little quests. If their approval rating is high enough, you can get them to follow you and help out with things like beating up guards.

That’s Great, But Spoil Me On Every Crafting Recipe

Well, okay, but it’s a bit less fun that way. If you want to know how to construct every tool, outfit and object then here’s a full list.