If you’ve wound up on this page, then chances are you need a bit of guiding nudge with something in Future Unfolding. Discovery is the game’s great joy, but I totally understand if you’ve been wandering around in a circle for an hour and want a bit of a hint.

Now, because the game is procedurally generated (to an extent), this article isn’t going to be any sort of direct walkthrough. Instead, it’ll help you out with the abilities of the strange plant and animal life, and suggest some common approaches to the environmental puzzles. Game mechanic spoilers are, naturally, going to be a consequence of reading this stuff.

Again, it’ll be more satisfying to figure most of this out on your own. But if you’re really stuck, here’s my advice.

You goal on each of Future Unfolding’s levels is to reach the big, white rotating sphere thing that’ll take you on to the next realm. Progress towards this objective is usually stymied by environmental hurdles or simply by overlooking a route to a new area.

There are ways to get the big white sphere’s location marked on your map. If you can find three of the purple pyramids and sit at them, this will reveal the area you need to go. Progress on the pyramids continues between worlds, so if you found two in the prior zone, you should only need to sit at one more to get the sphere marked on your latest map. It’ll show up as a yellow circular symbol, similar to the one you might see on Future Unfolding’s infrequent loading screens. 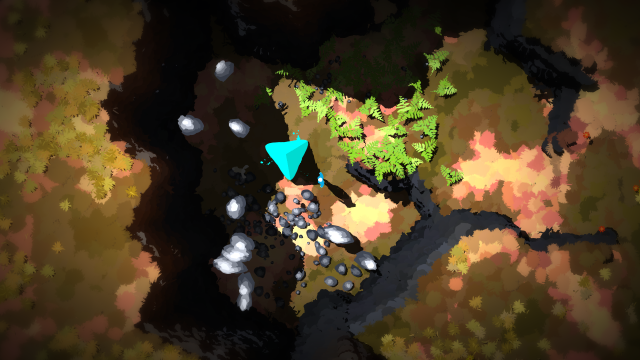 Pyramids are your pals. Seek them out.

Finding and speaking to the large, dozing animals can also reveal areas of interest (or, sometimes, a purple pyramid). If a pink dotted circle gets marked on your map, this tends to be an area with a puzzle that involves linked together trees, or rocks, or otherwise ‘painting’ a basic Nazca Lines type symbol on your map. Solving these is sometimes (but not always) necessary for progress, and you’ll often find them near the big white exit sphere.

The chubby white flower pod things which pop out a blue seed give you a temporary burst of speed to your dash and (I think) also extend its time a little bit. You’ll lose these effects if you die.

Sometimes, chatting with the larger animals will result in the appearance of a blue sphere. These are two-way teleporters. If you go through and don’t fancy what’s on the other side, you can come right back through.

Future Unfolding also has one-way teleporters. These look like green bushes which kind of ‘bubble’ when you use your main action button near them. They’re sometimes a quick way to return to the entrance of an area, sometimes part of a puzzle, and usually worth trying at least once to see where they go.

Touching certain magical trees (look for lone trees that appear to be infused with some kind of energy) will teleport you to underground caves. These tend to be two-way teleporters as well. 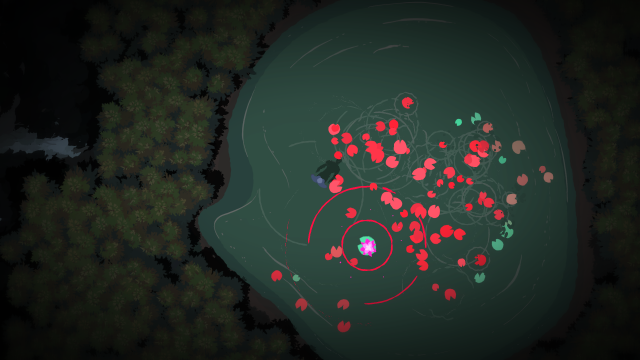 If nothing else, the inside of magical caves can be rather pretty.

Speaking of caves, you should investigate them. While not strictly teleporters (though sometimes they will move you to unexpected places), they allow you to reach out of the way areas or create shortcuts between areas.

Animals appear all over the place. Sometimes they’re just hanging out, other times you’ll make them appear by dashing over certain types of vegetation. Deers and stags tend to appear from ferns. Sheep like the yellow grazing grass (you’ll learn to recognise these pretty swiftly).

Rabbits – Using your main action button once will befriend them and make the follow you. Pressing it again while near them will, on certain types of ground, spawn a bush. Swarming insects love bushes, so that can be very helpful.

Pink Rabbits – Your main action button will push these guys away from you. If they hit rocks or trees, they’ll make them disappear. Sometimes they’re just wandering around and can be befriended like normal white rabbits. I think that only tends to happen once the puzzle they’ve helped with (or could help with) has been solved – or they’re too far away from the area.

Black Rabbits – Sometimes one of these will appear after you’ve spoken with a larger animal. I’m not too sure if they have a special purpose (probably). They can be befriended and will follow you around.

Deer/Stag – Just riding them around is fun, but their most useful skill is jumping across gaps. To ‘tame’ them is a little tricky, and not all that precise. Basically, jump on one (action button), then wait for their little semi-circle of white lines to appear and hold the action button again. If you time it right, your blue semi-circle should kind of ‘overwhelm’ the white, and give you inexact control over the deer or stag for a short period of time. Sorry if that sounds imprecise, it’s kind of a knack you’ll get used to through practise. You never seem to get them under complete control, but it should be possible to vaguely guide them towards the gap you want to jump across. Can also carry you down windy passages. 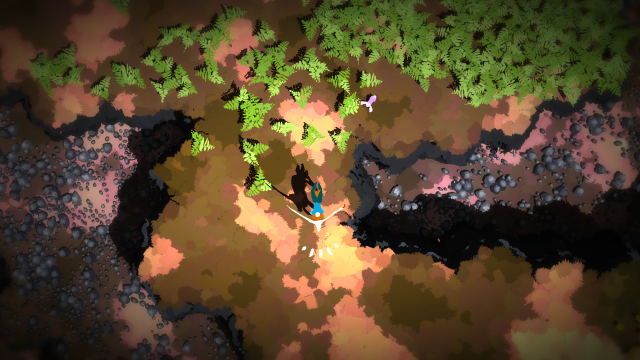 Those are the white ‘vision line’ things I mentioned. Plus bonus pink bunny.

Sheep – Befriend them and then hold down the main action button to (sometimes, if viable) initiate a short-ranged teleport. Any objects (trees, etc) nearby will be teleported with you. This can be key to solving some puzzles. Sheep can also be used as impromptu bouncing platforms to reach higher areas. Lead them to water and they’ll get much larger. You can then bounce off them with your action button (they’ll shrink again over time, and if you lead them out of an area).

Lion – If you wake up a sleeping lion, it’ll give chase and split itself into further lion copies to harass you even more. Always dangerous, as far as I found. Avoid them, or use the landscape to lose them. They’ll also be distracted by rabbits or sheep if you’re leading those (but that means getting your friends eaten, you monster). Pink rabbits bounced into lions will make them vanish.

Insect Swarm Thing – As mentioned, they love bushes. If there’s nothing better to latch on to in the nearby area, they’ll latch on to you and bite you to death. So try to find ways to prevent that from happening.

Fish – Generally not all that useful, but some puzzles will benefit from using your action button to scatter a school of fish in such a way that they disrupt other objects in the water or nudge them into a current. 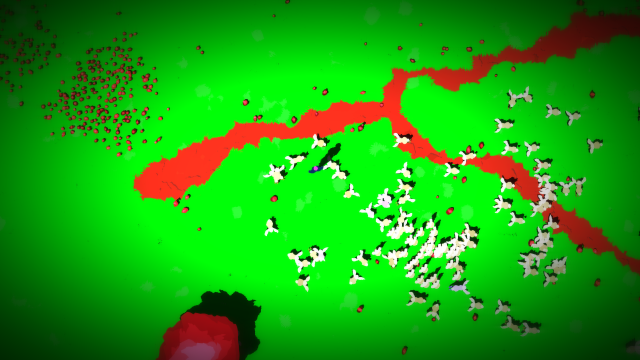 One can never have too many rabbits.

Turtles – Stomping badasses who can quite literally mess with reality. If you see a bunch of objects appearing, followed by a gaping void, then there’s a turtle around somewhere. You can harness their power to remove landscape objects in your path (by coaxing a void to swallow them), but otherwise it seems best to steer clear.

Birds – There are multiple types and colours of bird in Future Unfolding. They get marked on the map, so they can presumably do something, but I never figured it out. At once stage, I had some rabbits with me and the purple parrot-like bird type seemed to swoop low and get a ‘something might happen’ bubbling effect around it, but I couldn’t get anything further to occur. Let me know in the comments if you’ve unlocked any bird secrets!

You’ll run into different puzzle types throughout the game, but they share a common theme – preventing your progress.

If you find a suspicious looking collection of trees or rocks that look like they ought to be forming a pattern, then use your action button to link them together. Get the shape correct, and some magic energy will appear with a music cue and do … something to aid you. Usually it’ll clear a path.

The other one to look out for is covered symbols. You might see some circles or straight lines on the ground, but covered by some organic matter. Use your dash to run along them and uncover whatever shapes are concealed (sometimes doing so will unearth further covered symbols). As with the above, you’ll know you’ve ‘finished’ when some magic paint splash clouds appear to help you out. 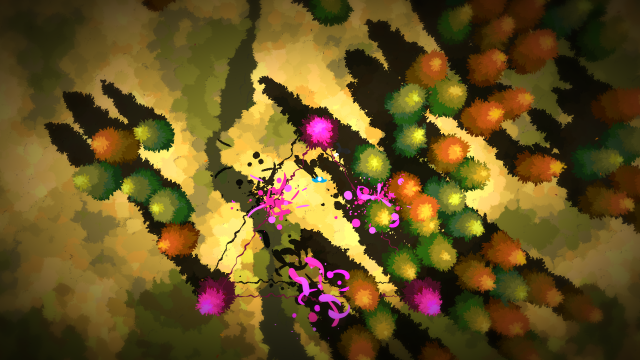 Sometimes you’ll simply run into a physical object blocking your path. If you see a cluster of pink flowers nearby, use your action button on them – they tend to act like a switch, turning sets of rocks or trees on and off. You can also manipulate animal abilities (such as the Turtle’s voids or the Pink Rabbit’s power of bumping into objects to make them vanish) to clear a route. If you’re needing to get beyond a windy valley or across a gap, look for some deer.

A caveat here: the options I’m going to describe appeared in the review build, but I’m not 100% certain they’ll make it to the full game. The pause menu contains options labelled ‘Unstuck’ and ‘Restart World’. In the rare event of getting caught up in a weird bit of procedural generation (this happened to me once while reviewing), ‘Unstuck’ will re-center the character in the current mini-area. ‘Restart World’ will, as the name suggests, regenerate an entire new world, so only use that one in dire circumstances.

With knowledge of the rules of Future Unfoldings world, you’ll be free to surpass any obstacle it throws in your path.