If you’re playing Elite Dangerous in VR and fancy changing the cockpit colours to something with a friendlier contrast on your eyes, then read on.

Elite Dangerous is without a doubt the most impressive game to make use of the Oculus Rift, it’s truly immersive and gives the player a real advantage in combat. Coupled with a HOTAS setup such as the Saitek X52, the game feels fantastic in VR.

There is one gripe I have with the game though, and that’s the UI menus when using the Oculus Rift. I decided that it was time for some experimentation with the UI colours to see if the in-cockpit menu system could be made a bit more legible and less of a strain on the eyes in VR.

Before I get to what I found was the best scheme for the UI when using the Rift, I’ll explain quickly how it can be changed for anyone who hasn’t tweaked the colours yet.

Inside the Elite Dangerous game folder, where it was installed, go to:

Inside this folder looks for a file called GraphicConfiguration.xml. Open this file in an text editor and look for the following lines.

The Matrix lines in the code indicate the Red, Green and Blue colour settings and these are the lines which will be changed.

Important: A quick reminder, It’s always a good idea to create a backup of the GraphicConfiguration.xml file before you make any changes just in case it all goes horribly wrong.

It’s bit of a pain trying to figure out what to change but thankfully there’s a very handy tool you can use on the Intertubes which allows you mess with the colours using sliders. Head to this page and you can play around with the settings.

Once you have what you want copy the text from the box in the bottom left of the page and then replace the “Matrix” lines in the GraphicConfiguration.xml file with the new values shown in the box.

With that done, load the game up and the UI will have changed colour to your new values.

After messing about with this for around four hours, and experimenting with different values in the rift, there was one that stood out. Before we get to the best one, I’ll share a few of the others that didn’t work quite as well in the Rift.

I had to try a pink one first, but while the text was OK it really was just too gaudy to explore space with. 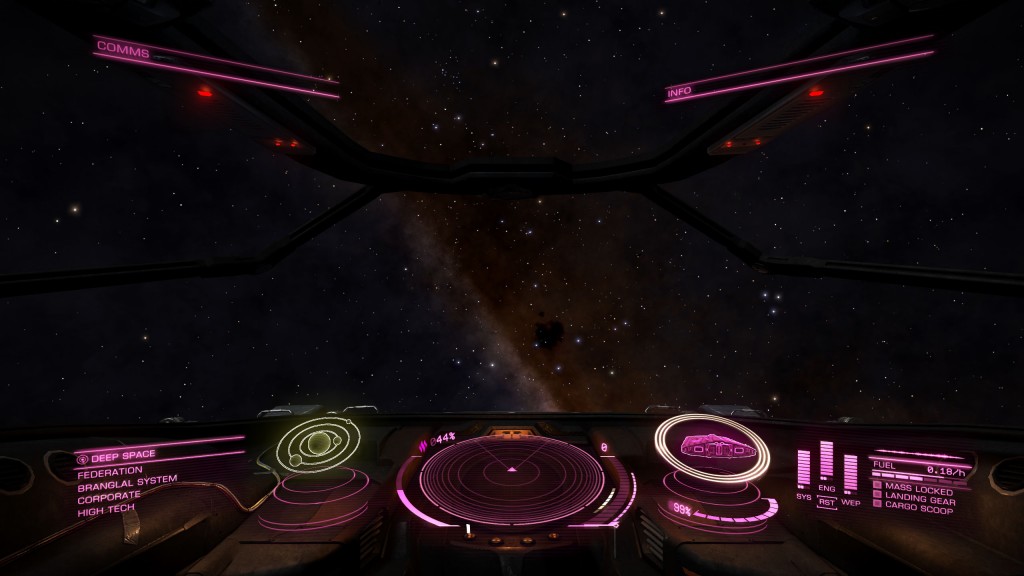 While the blue looks quite nice, the text on the HUD was really not that clear when shifting the HUD brightness up and down in the game. 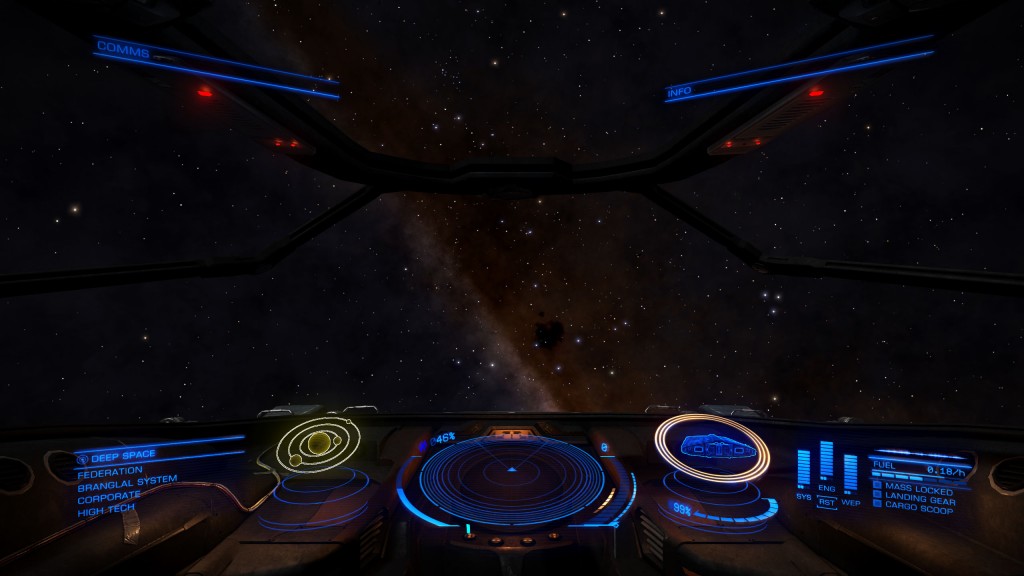 The green scheme wasn’t too bad and would probably be a good second choice for Rift users. 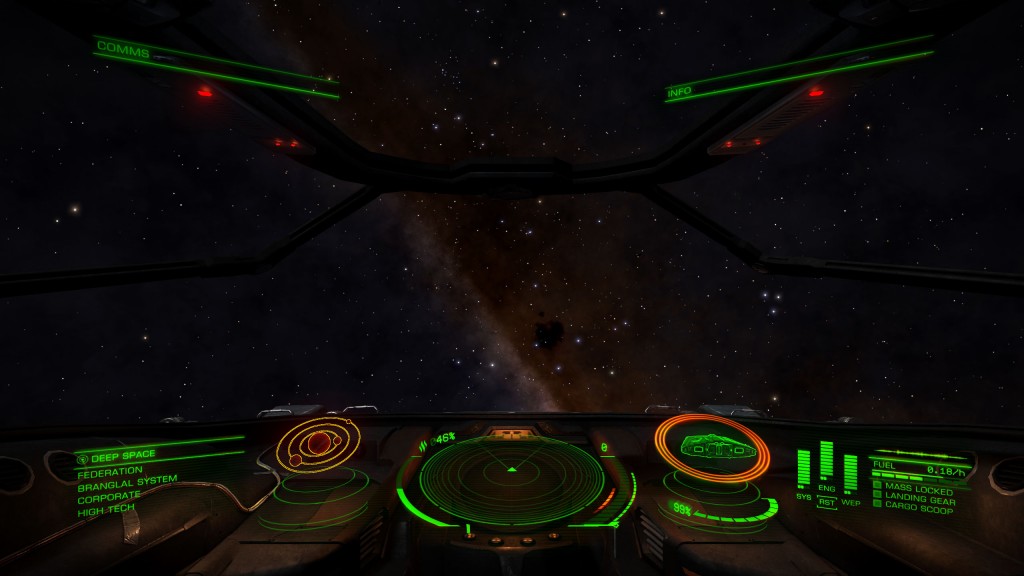 The white wasn’t bad either and quite clear in the Rift, but tended to feel a little blurry and was a little overwhelming in its intensity, which was surprising. 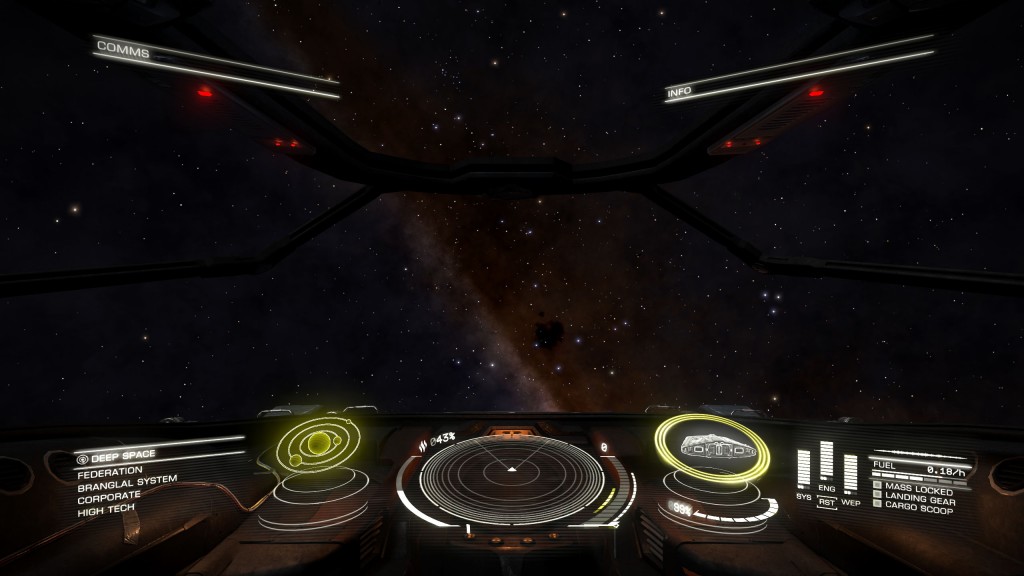 While I thought the red could be the one, the text tended to bleed so that was scrapped. 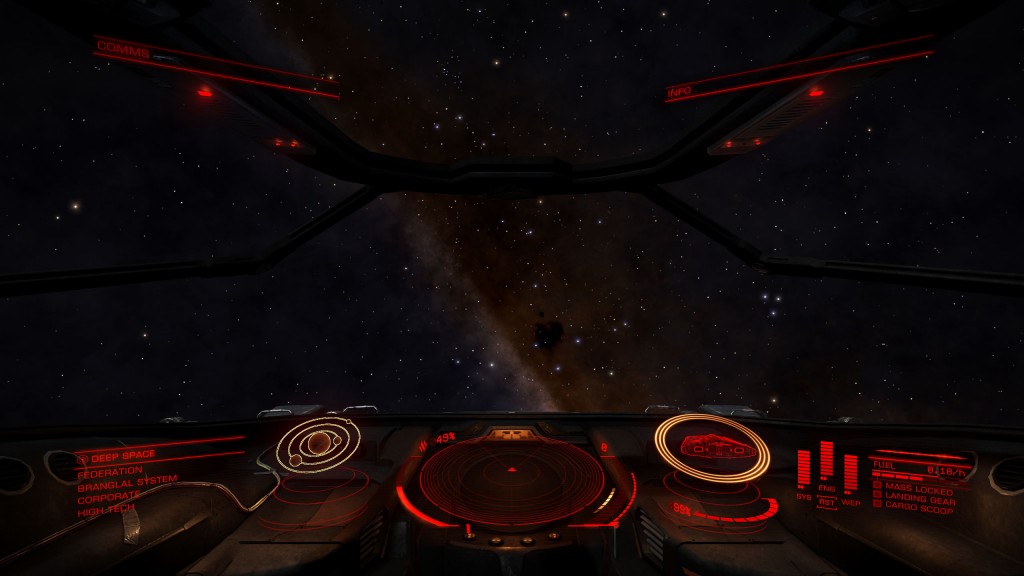 And so to the final choice, the one scheme that I thought worked best in the Oculus Rift for text legibility. It may not be the most obvious choice, but it worked extremely well for me. The wining colour scheme is this yellow one below.

While it may not be the most attractive looking colour scheme, the text really stands out in the Rift making the menus easier to read at the lowered resolution. 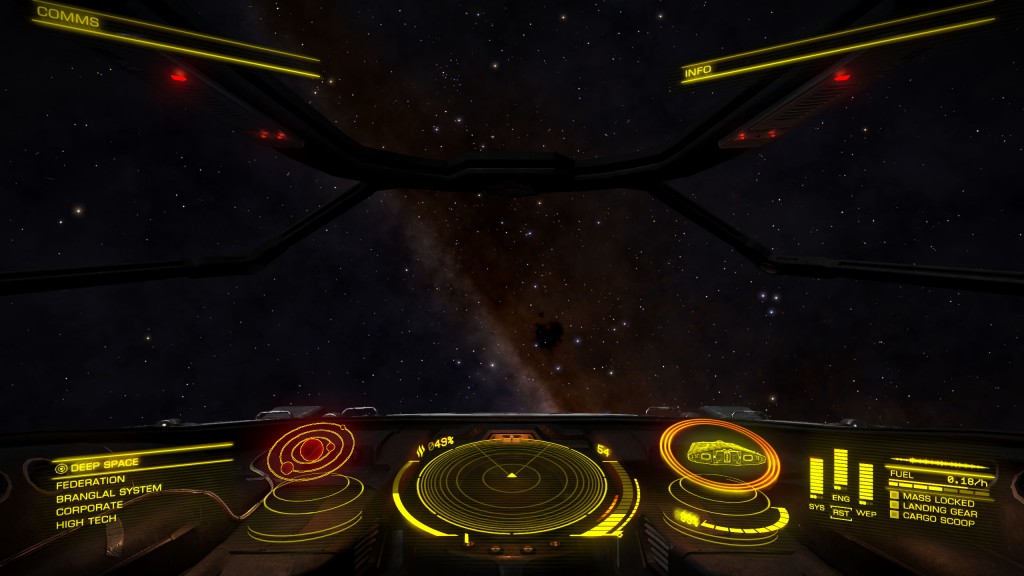 Everybody’s eyes are different, so it’s probably best to experiment with the ones in this quick guide and play around with it yourself. It is fairly time consuming (as you have to quit out of the game each time you want to change the colours,) but well worth it if you intend to utilise the Rift for lengthy play sessions.

Even if you don’t own a Rift then it may still be worthwhile changing the cockpit colours for a change of scenery. Hopefully Frontier have plans to add some in-game sliders to make tweaking the cockpit a little simpler. For now though, a little but of file editing can go a long way to improving the experience, especially in the Oculus Rift.