There’s a fair amount to juggle in Aven Colony, from power distribution, to food supplies, and general colonist morale. If you’re a veteran of city building games then you should be fine, but for those who are new to the genre or a bit rusty in their planning skills, I’ve compiled a few bits of advice.

They may not translate to the very highest difficulty level, but they should serve you well if you’re playing on Normal or thereabouts. This was written at release (25 July 2017), so patches could of course change some of the balance in future.

Unlike others of its type, there are no supply lines in Aven Colony. That means you don’t have to worry about putting your food-producing Mill miles away from your Farms; they’ll get the resources just the same.

Building placement is still important in other ways, though. Colonists do not like walking far to work, and they definitely don’t like having to walk through other buildings. Forcing them to do that will cause a big hit to morale. Make sure there are tube routes to every staffed building (a basic grid structure works pretty well) and that there’s at least an Outpost near to any workplace. Definitely worth remembering when you build a distant offshoot for a mine or something. The ‘commute’ overlay will show you where you have any problems. 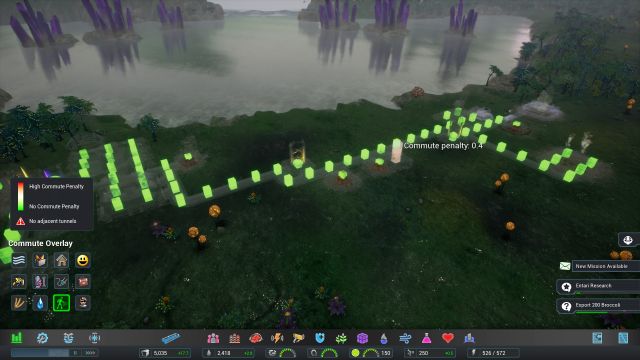 Only one trouble spot here, nothing too major.

On that note, not all buildings have workers. Many, like the Storage Depots, are automated, so you can shove them far away from colonist habitats with no penalty.

Building efficiency is very important in Aven Colony. Basically, if a building with a workforce is not fully staffed then it won’t be producing things very quickly. If you’ve expanded too quickly, you might end up with only 60% of your jobs being filled. To remedy a workforce shortage as swiftly as possible, make sure the Immigration building is fully staffed (which will bring you 9 new colonists per trip). Do that by clicking on the building, then the briefcase next to the portraits, and bumping it up to the maximum level. 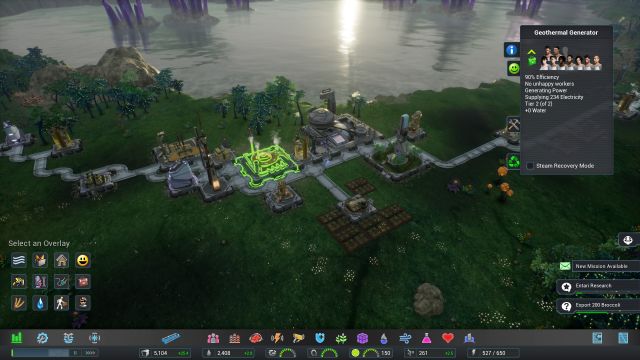 Briefcase icon is pictured in the top right (ish).

If you can afford it, build another Immigration center and set that to high efficiency too. Then scale down again when needed. In general, keep an eye on how fully staffed your buildings are, and give them a boost or a reduction as and when you need production altered in a particular way.

Some buildings have alternative modes or can be boosted in some way (Farms and Greenhouses get a huge boost from using Potash, for example).

Without Nanites, your Aven Colony settlement isn’t going to last very long. You’ll get little boosts from completing missions, and a larger chunk if you find a resource pod laying around for your construction drones to pick up, but you’ll need to be producing your own as soon as possible.

Most of the early missions walk you through this process in issued missions, but basically make sure you get an Iron (or Copper) Mine and Nanite Processing building up pretty rapidly. Laser Mines are faster at extracting materials, but also destroy some in the process. I relied on the slower, but much more dependable regular Mines. 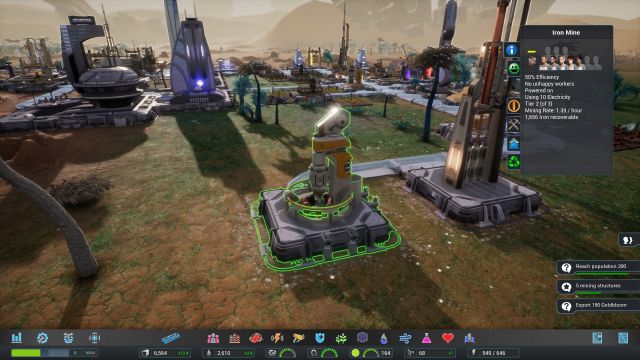 Paying the Iron price for my Nanites, except literally.

If you get absolutely desperate for Nanites, remember that Kelko Spores can be turned into Kelko Sludge with a Chemical Plant, and then used to (slowly) generate some cash.

A level 1 Greenhouse is a little more than twice as expensive as a level 1 Farm (21 Nanites vs 9), but it will produce more food in the warmer periods and keep producing at half rate during winter (versus not producing anything). I haven’t done intense statistical analysis on this, but it seems like at a minimum you should aim for the same number of Greenhouses as Farms. There could even be an argument for just building Greenhouses.

Keep an eye on the food meter; if you’re losing huge amounts of food during the winter period (something like a steady minus 30, or less if you have a small population) then you should up your agricultural output. Some food loss is inevitable since it’s winter, but as long as you’re making it up in the sunnier periods then you’re okay. 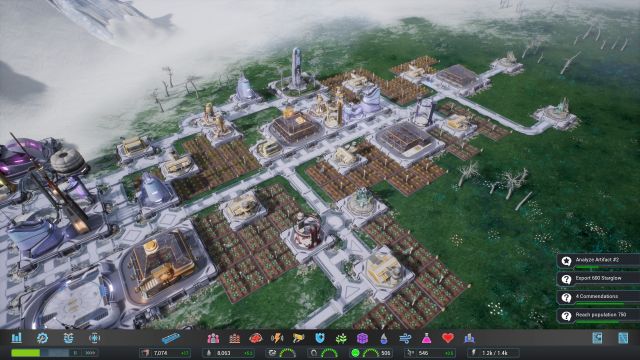 Alien crops are often an option and can ultimately help you increase food variety, but remember that you’ll need to first research recipes in a Tech Center and then produce the foodstuffs in a Mill. The Mill also gives you some options for Earth foods too, like pasta and porridge.

On some Aven Colony maps you won’t have access to any nearby fertile land. In those circumstances, you’ll have to rely on trade as you expand to some greener pastures. Once you’ve built a Trade Hub you’ll be able to use the trade button (bottom left side, with the overlay button and colony options) and bring in some emergency food. Nanites for ration packs is (I think) always there, but you might also be able to export some iron or another mineral. Avoid doing this too much though, since Nanites and iron are critical to your colony as well. 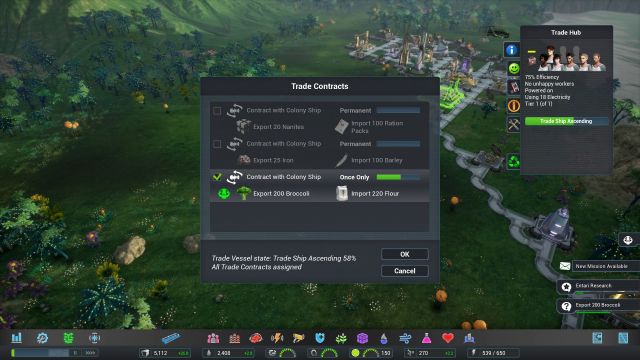 Any excuse to get rid of broccoli.

Water supplies are pretty easy to sort out. Use the Water overlay to find an area that’s pumping a decent amount. Stick down a Water Pump. Put down more when necessary. I barely used the atmospheric converter things, but they’re your fallback option if there are no decent spots for a pump. You can also convert Geothermal Power Stations to Steam mode through their building options to generate water that way in a crisis.

Speaking of power, opt for Geothermal all day every day where you can. It’ll keep on rolling through the winter. Open geothermal springs can erupt with toxic gasses (so you’re avoiding that by building on them). And they’re pretty cost effective (especially at level 2).

Zorium power is great too, but tends to be a later-game construction. Solar panels are (for obvious reasons) very ineffective in winter, so I didn’t find them very useful at all. Wind turbines are okay in an emergency, and their secondary function (setting them to ‘blow’, basically) is helpful for pushing away toxic gasses. Thing is, you shouldn’t have any toxic gasses if you’ve built Geothermal Generators on all the nearby holes. 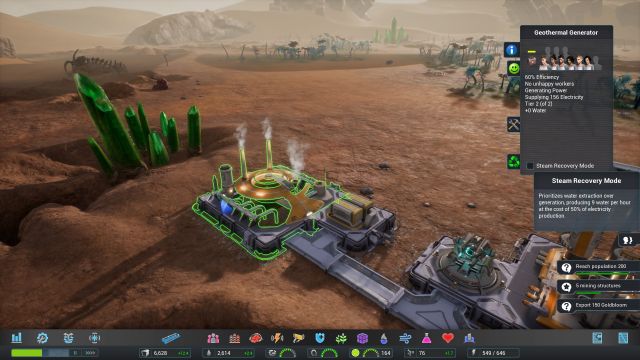 Note the air filter next door to deal with any emissions.

It’s worth building a battery or two so you can also build at least one Lightning Tower. They’ll give you some back-up power, and protect against the winter storms.

I prefer the Air Filters to Intake Fans. The latter are a risk when Plague Spores start showing up, whereas the former are not. If your air quality starts to dip, use the overlay to pop down some Air Filters close to where air is at its worst. Power Stations and Mines are usually the culprits.

Once you reach a population of 100 in Aven Colony, the people will start participating in direct democracy. Fail to impress them (by getting above 50%), and you’re out. To survive this brutal assault of voting, you need to keep morale up. Generally, if the obvious are taken care of (food, water, power, air quality, housing, a job) then you’ll get reelected.

Keep regular watch on the crime overlay and put down a couple of Police Drone buildings where needed. Colonists seem quite fussy about their law and order. 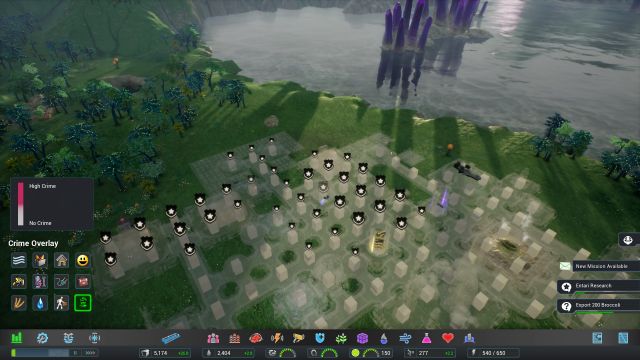 Officer Dronerson seems hard at work in this sector.

If the people need a little bit more encouragement, it’s time to dip into the Services section. A Bar and Grill near residential areas will help, as will scattering a few Parks around (if you have the cash for it). VR Buildings combined with the ‘Free Gaming’ policy (if you’ve already won enough Referenda to be able to use it) will provide a boost too, but cost a bit more Power from all the Colonists watching VR erotica all day long.

If you’ve been producing exotic alien Enhancers in your Chemical Plant, putting down a Dispensary will allow you to distribute them as you please. Be aware that some of them have long-term health risks though. Speaking of health, a Hospital is an expensive but decent boost to morale too.

In the Colony Control Panel (bottom left), you can bring up a list of individual Colonists and sort them by morale. Then you can click on individuals to find out what the grumpiest ones are so annoyed about. Probably just some minor matter like they have no food or they’re choking to death on low quality air. 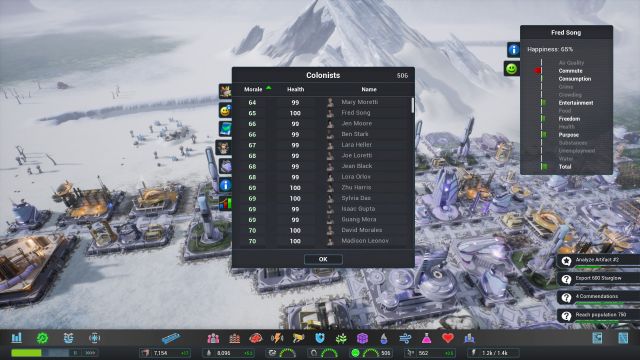 Fred’s upset about my generous provision of a long, healthy walk to work.

Threats and How to Deal With Them

Inevitably, your plucky band of Aven Colony colonists will run into threats. These don’t tend to be ‘disasters’ as such, but they can set you back by disrupting things for a bit (which, during a referendum, can be a bit of a problem). Each one has a pretty clear counter strategy.

Lightning Towers. As mentioned above, these will protect your colony from the winter storms and give you some back-up battery juice for good measure. Worth having a couple of these around to cover yourself.

Plasma Cannons. Technically they’ll shoot at things like creep spores and plague spores, but they don’t tend to do a particularly great job there. They seem better at fending off ice shards. I wouldn’t go crazy with these unless you’re being inundated with spore attacks.

Scrubber Drones. A better solution to the creep spores. As long as you’ve got enough to cover your colony (they have limited range, like other drone types) then creep spore attacks shouldn’t be a major worry. Again, you’ll need to step that up if they start appearing in swarms. 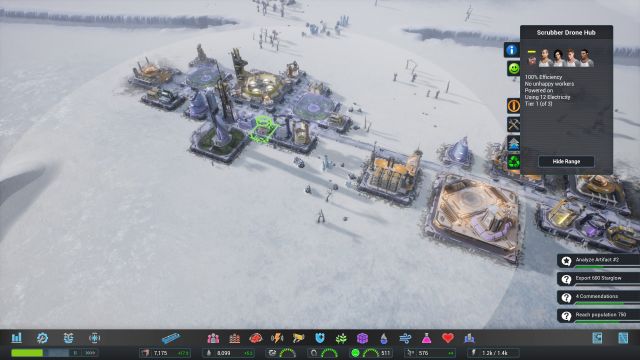 You’re in the scrubzone. Oddly, that’s actually a good thing.

Intake Fans. These are actually your enemy. Toxic gas can get in, and so can plague spores. If at all possible just don’t use them and opt for the Air Filters every time (sometimes you get stuck with a fan you can’t remove from the base colony, nothing you can do about that).

Wind Turbines. As noted previously, they can be set to reverse and blow away Toxic Gas. Handy in some situations.

Geothermal Power Plants. Your best defense against Toxic Gas coming from geothermal springs. Put down a power station and harvest that lovely power.

Hospitals with Plague Vaccines. If the plague spores do get in, you’ll need a hospital and a supply of vaccines (manufactured in the Chemical Plant).