Now, I’m not a Heroes of the Storm expert; far from it, in fact. But I’ve picked up enough over the past few months that I can offer you a few explanations, tips, and bits of general advice on how it all works, which might make your early experience a little bit smoother. I’m not going to discuss how MOBAs work, because the tutorial can handle that if you don’t already know, but instead offer a few more direct bits of information about getting started. In short: I’m not going to give you all the answers, but I might be able to help you figure out what sort of questions you should be asking. 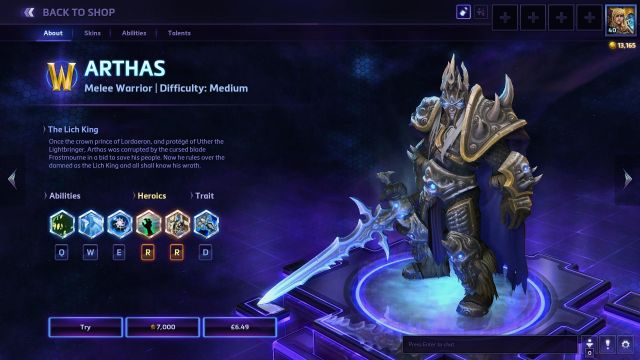 From hero to villain to raid boss to regular fixture in the Nexus. Not sure if that’s an improvement, or…


Heroes in Heroes of the Storm are divided up into four poorly-explained categories: Warriors, Assassins, Supports, and Specialists. Here’s how they break down:

Warriors, like Chen or Arthas, are your front-line tanks, generally specialising in survivability and control.

Assassins, like Illidan and Jaina, are your raw damage dealers, who tend to be made out of paper but inflict huge amounts of pain on either a single target, or a group.

Supports, like Malfurion and Brightwing, are your back-line, usually offering a mix of healing and control with the aim of keeping everyone else alive.

Specialists, like Gazlowe or Abathur, are a completely nebulous group that’s pretty much Blizzard shrugging their shoulders and going “Yeah, this guy doesn’t really fit into the other categories.” They’re theoretically better at sieging or clearing jungle camps, but plenty of other heroes can do those fine with certain talents anyway.

None of this, though, is exactly set in stone. Plenty of Warriors are also capable of inflicting a lot of damage if talented properly. Assassins might be able to focus on lifesteal, regen, and mobility to keep themselves alive even without a Support, as long as they don’t get stunned or otherwise controlled. A lot of Supports can fall into a jack-of-all-trades category; Tyrande can heal, stun, inflict damage, and get your team superb vision, and different talents let her do different parts of this exceptionally well.

And Specialists can… uh… look, they’re special. Azmodan can help lanes push even when he’s not there; Sgt. Hammer can focus on sieging towers or can inflict a level of damage on heroes that would make Assassins jealous. Most of them are pretty good at taking jungle camps quickly and safely. They’re a bit odd.

Ideally, you want your team to have a reasonable mix of these classes, although you can usually operate without a Specialist. 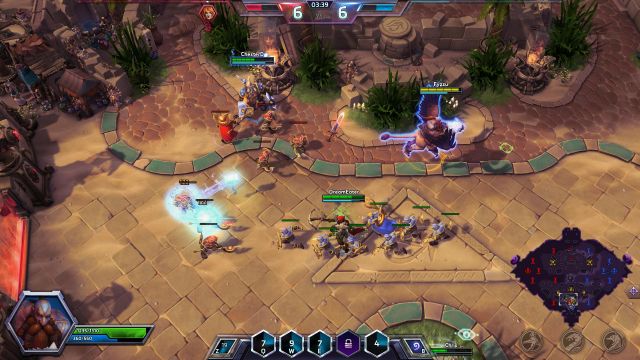 This one, alas, wasn’t lost on the draft – it was lost by some seriously bad teamplay.

On that note: early on, most of your time is going to be spent playing Quick Matches. One of the first things you should learn is that raging at Quick Matches really, really isn’t worth it. Go into them with the mindset that you might’ve already lost by the time you click to find a match, and you’ll have a much better time.

It comes down to team composition, which is something that is incredibly important, and is absolutely not something that Quick Matches take into account at all. You pick your hero and then search for a Quick Match, and are automatically matched up with a team. While the system seems to try to create teams that aren’t complete shit, it has mixed success at this, and there is every chance you’re going to wind up with a team that has absolutely no synergy and simply doesn’t stand a chance against a team of evenly matched players with better composition.

As such, having a vague sense of resignation whenever you start up a Quick Match is a vital survival instinct. You might win and you might lose, but there’s a fair chance that player skill will be somewhat irrelevant to the end result. 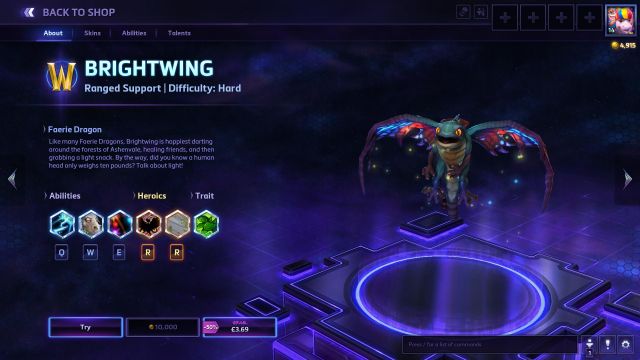 One of the big hurdles with Heroes of the Storm is that it’s a free-to-play game which most definitely isn’t free. You can play a different set of heroes for free each week, but considering that you unlock more talents (and thus versatility) for those heroes by playing them repeatedly, chances are you’ll want a readily accessible pool of those you actually enjoy playing.

Before you reach for your wallets and/or balk at the ridiculous real-money cost of some of these heroes, though: you can actually build up a decent collection fairly quickly and fairly cheaply.

Firstly, don’t spend money on heroes. Obviously, you can if you really want to, but without some sort of “pay £30 to unlock every hero in the game” option this will quickly become very expensive. If you absolutely must pay for heroes, I’d recommend going for the cheaper ones (Valla, Epic Tauren Chieftain, Muradin, Raynor, and Malfurion are £2.99 each, which isn’t too offensive if you really want to drop cash on one or two heroes) or waiting for the one you want to be on weekly sale. At the time of writing, for instance, Brightwing is 50% off, dropping its eyebrow-raising £7.49 cost to a somewhat more sensible £3.69. 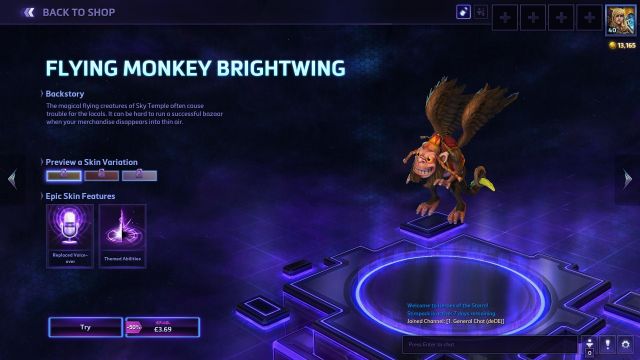 Correction: Brightwing as a flying monkey is the creepiest fucking thing.

Secondly, all heroes can be purchased with in-game gold… and early on, this is actually tremendously easy to get. I’m not talking about the tiny trickle of gold you get for playing matches, either. With a little focus, you can get your hands on a pretty large stack pretty quickly.

Once you hit level 6, you also unlock Daily Quests. Every day, you’ll be given a new objective, with up to three stored at once. These are also pretty easy to complete: playing three matches as a support will give you 300 gold, while winning three matches gets you 600. You can complete multiple quests at the same time, too; if you have both of those aforementioned quests at once, then if you play and win three matches as a support hero, that’s 900 gold. If you can only find the time to play a few matches every few days, this is a really good method of quickly accruing gold.

The upshot is that you can earn a minimum of 300g a day if you complete your quests. You can game this system a bit to increase your chances of getting high-reward quests, like the 800g reward for playing 8 matches, but you can find plenty of advice on how to do that elsewhere. 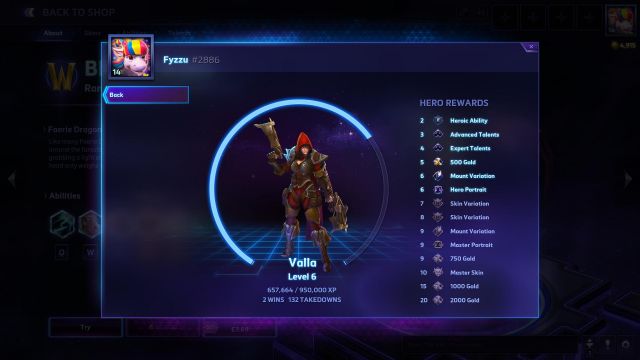 The other easy method of getting free gold is to level up heroes (in your profile, not in a match). Getting a hero to level 5 gives a free 500g, and with 37 heroes in the game, that’s another 18,500g just waiting for you to pick it up. It shouldn’t take too long to get a hero from level 1 to level 5, so you’ve got plenty of opportunity to do that with each hero you’ve yet to play when they’re one of the free heroes for that week. (More gold is also available at levels 9, 15, and 20, but these take considerably longer to hit.)

One more thing. Your account doesn’t carry across each region, so if you mostly play on – say – NA servers, you can “safely” try out heroes on the others. Create an account on the EU servers, start getting some of your easy gold, and buy a hero you’re curious about there without risking 10,000g on your main account. (This is also why my profile is level 14 on some of these screenshots, and level 40 on others.)

So, to summarise: don’t spend money. Level up your profile. Clear out your quest log every three days, if not sooner. Get every free weekly hero up to level 5.

No, you won’t be unlocking every hero in the game super-quickly, and the high-priced heroes will still take quite a lot of time and investment, but the way Heroes of the Storm is structured means that there’s an awful lot of money on the table for newcomers. All you have to do is take it. 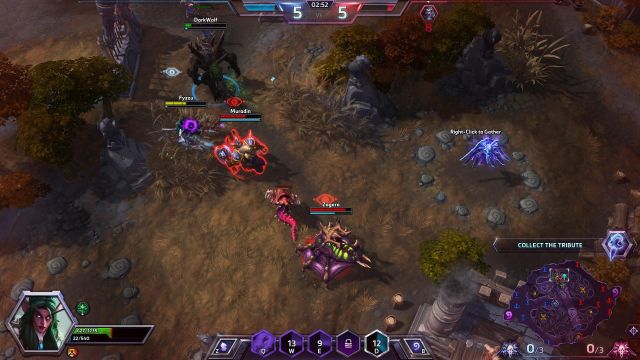 Believe it or not, we got this Tribute. Although… well, it’s against AI, so that’s not much of an achievement.

The Importance of Being Objective


One of the big differences between Heroes of the Storm and other MOBAs is the presence of map objectives. These differ from map to map, but are similar in that they’re regularly-appearing flashpoints which give one team an advantage, generally in terms of sieging the enemy base.

For instance! Blackheart Bay routinely spawns treasure chests and offers jungle camps containing coins; handing these coins over to the ghost pirate in the middle of the map has him bombard your foes’ towers and forts for a short period. Haunted Mines routinely spawns skeletons in the mines which, on death, drop skulls that can be used to power up your grave golem – a monstrous horror that smashes down lanes when all skulls have been taken from the mines themselves.

This is a big, big change, and these objectives cannot be ignored. Losing one doesn’t mean it’s the end of the match, but it will give your opponents an advantage – and that advantage can then be pressed harder when the next objective pops up. As matches go on, these things become vastly more important. An end-game Dragon Knight will crush a base. A 100-skull Grave Golem will rampage to the core. Letting your opponents get a bombardment on Blackheart Bay when your core is exposed is pretty much the end of the game, and if they get a lot of early bombardments, you’ve got significantly less map control and can’t contest the coins as easily. Etc.

Now, this is obviously situational – there are occasions when, yes, it’s better for people to go and take jungle camps or push a fort or run back and heal rather than immediately rush to the big flashing point on the map, particularly if your team can handle what’s going on by themselves – but do not underestimate just how powerful and how important these things are. When you’re still figuring out the flow of the game, it’s usually best not to second-guess yourself and to just go for the objective, as long as you’re not throwing your life away for no gain. Map objectives win matches, and that’s not an exaggeration.